The January 5, 2019 meeting of NSS North Houston Space Society was a big success.  Doug Hall gave us an overview of the Gateway.  Dr. Greg Stanley talked about orbits and the pros/cons of various of each for the Gateway.  Dr. Feng Hsu talked about the benefits of Space Solar Power (SSP) and the need to prioritize it.  And there was much lively discussion before, during, and after the presentations.

In Doug Hall’s presentation, we saw the 2016 plan for the Gateway (previously called Lunar Orbital Platform and Gateway (LOP-G)) which was a slimmed down, minimalist version of the orbital platform with 10% of the pressurized volume of the ISS.   Compared with the version that was announced in summer of 2018 which had 8 modules and would be manufactured by a host of countries.   This would result in agreements between the countries that would make the Gateway “cancellation proof” once it got underway. 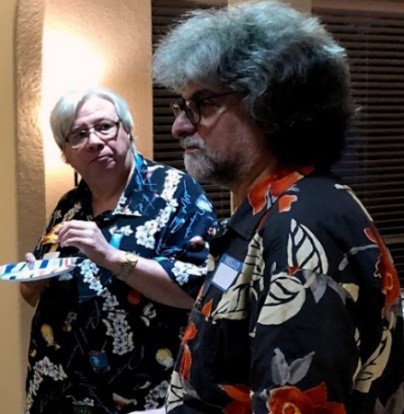 David Cheuvront also attended and was able to provide some background of the Gateway back from the Vision for Exploration (VSE) days where the Gateway would also serve as a fuel depot (which is not in the current plans).   In the JSC concept, propellant supplied from terrestrial sources for re-fueling in Low Earth Orbit would facilitate lunar resource development, both of which would precede the development of an L1 Propellant Depot/Gateway.

Dr. Greg Stanley gave a presentation of various orbital parameters, orbit families, and key considerations of each.  He explained the difference between the Low Lunar Orbits, Prograde Circular Orbits, Frozen Lunar Orbits, Elliptical Lunar Orbits, Near Rectilinear Halo Orbits, Earth-Moon L2 Halo Orbits, and Distant Retrograde Orbits.  We looked at the feasibility of reaching each from Earth using Orion, ability to access the surface of the moon, the amount of propellant needed for station keeping, the ability to communicate with Earth, and the ability to cool the station in each orbit with radiators.  After looking at this analysis, it became clear why NASA is interested in the Near Rectilinear Halo Orbit (NRHO or shortened to NRO). (see the full presentation: Lunar Gateway Orbit Options Presentation) 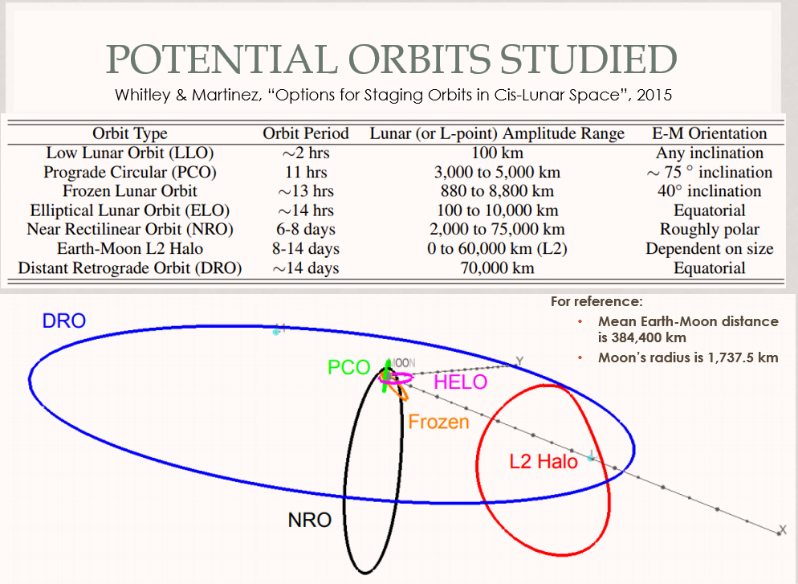 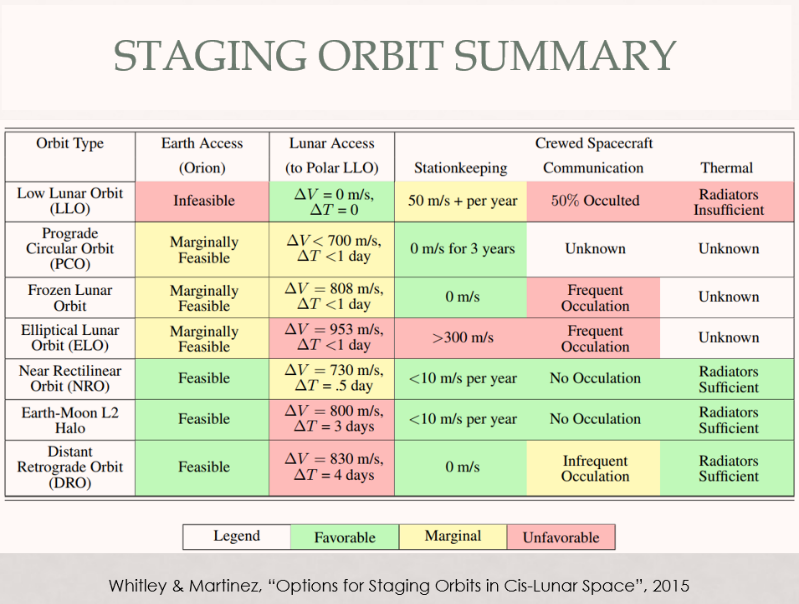 Dr. Feng Hsu also visited our club.  He is the chair of the NSS Space Solar Power (SSP) Committee and is the NSS Director for our region.  He has worked as a Senior System Engineer at Lockheed Martin and as a Sr. Engineer, Manager at NASA’s Goddard Space Flight Center.   He pointed out that China has big plans to develop space.  This week they landed a rover on the far side of the moon, and China plans to have manned missions to the moon by 2035 with a permanent lunar base on the south pole.  And with the non-interference provisions of the Outer Space Treaty, the group that gets there first effectively has control.  This will lead to a space race between China and other countries including the US.

Dr. Hsu talked about Space Solar Power (SSP).  China has plans to develop this important energy resource.  And there needs to be an American response.  He proposes the MAGA Project on Energy & Space which would be a concerted effort by the US to ensure that we are able to generate power in space 24/7 and beam it anywhere we need it.  Space Solar Power is an example of space activities improving life here on earth. Our three speakers were presented with framed pictures from the Falcon Heavy launch back in February 2018.  Thank you Dr. Feng Hsu, Doug Hill, and Dr. Greg Stanley for sharing your knowledge and leading the discussions about these exciting topics. Before and after the meeting, there were lively discussions.  Several people said that it was the best meeting yet.

Our next meeting will be on February 2, 2019 and Anita Gale will be speaking on Large Space Infrastructure Development.

When Gerard O’Neil popularized space settlements decades ago, we believed that people would be living in space by 2019.  The L5 Society and NSS kept the idea alive, and Space Settlement Design Competitions started in 1984 to get high school students interested in living in space.  Now, presentations in technical conferences are showing that serious progress is finally being made to enable space settlements to happen, and part of the path to make it happen was predicted by the high school Competitions.

In 1984, Anita co-founded Space Settlement Design Competitions, industry simulation games that engage high school students in designing future space settlements. The Competitions have evolved into an International activity involving over 1000 students each year on six continents. Anita’s work with Space Settlement Design Competitions was recognized by NSS in 2008 with the presentation of a Space Pioneer Award, in the Category of Educator.

She has worked as a Senior Project Engineer in Space Shuttle Payload & Cargo Integration, for The Boeing Company in Houston. Her professional career started on the Space Shuttle program in 1974, for Rockwell International in Downey, California. She provided conceptual designs for cargo integration on future launch vehicles, contributed to R&D for Shuttle upgrades and future missions of both reusable and expendable launch vehicles, and developed process improvements. She holds three US patents on launch vehicle payload interface standardization and containerization, which are essential technologies for reducing future vehicle processing costs and schedules.  After the end of the Space Shuttle Program, Anita developed cargo integration processes for the Boeing Commercial Crew program.  She retired from Boeing in 2016.