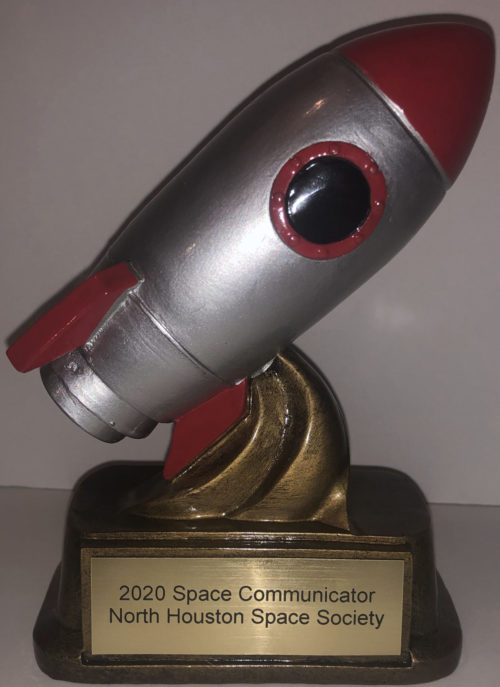 Chapter president, Nathan Price, started by giving an update on space events since the last meeting.

The pin is updated daily with the number of days remaining to achieve the goal of landing the first woman on the moon by December 31, 2024. He explained it at the recent briefing at Artemis day.

But that is about to change! Trent Martin from Intuitive Machines described the Nova-C lander that will land on the moon in 2021.

The Nova-C is the only spacecraft that is being built in the Houston Area. They do tests at Ellington Field.

check out the video on the Intuitive Machines website that illustrates how the mission will work:

And we look forward to having more people speaking about space at our meetings in 2020 as a result of it.

We also gave out a number of door prizes.

And took a group photo with Trent, which we will have displayed in our Launch/Landing party in 2021 to celebrate Nova-C’s successful mission.

We started the meeting with Tom Rowan. He had worked on the actuator for the radar disk on the Apollo lander. He also worked on the arm for the Mars Viking missions. And he has had a multi-decade career in engineering.

Yash Chandramouli shared information about the Matthew Isakowitz Fellowship program. He is a MS/PhD student studying Aeronautics and Astronautics at Stanford University.  His research interests include spacecraft formation-flying, reinforcement learning, and spacecraft pose estimation from images. The Matthew Isakowitz Fellowship Program made an immense impact on his life and career path and he is excited to talk about his experience!

-Matthew Isakowitz was an extraordinary young man whose passion for opening the commercial space frontier was only matched by his kindness and generosity to those around him. -Despite leaving us far too soon, Matthew’s contributions left an outsized impact on the space community. Finding inspiration in Carl Sagan’s words, “Somewhere, something incredible is waiting to be known,”

-Matthew began exercising his passion in high school by serving on the XPRIZE Foundation during the flight of SpaceShipOne, the first privately piloted spacecraft. -In college, Matthew worked on NASA’s New Horizons mission to Pluto at the Applied Physics Lab, -human space travel at Space Adventures, -and the Dragon capsule at SpaceX.

-Matthew’s career took flight as Associate Director of the Commercial Spaceflight Federation, which contributed to the transformation of commercial space pioneers—such as Elon Musk’s SpaceX, Jeff Bezos’ Blue Origin, and Richard Branson’s Virgin Galactic—into the notable players they are today. -Afterwards, Matthew continued to push humanity’s frontiers as an entrepreneur and engineer at Planetary Resources and Astranis. -Matthew was granted early acceptance to Phi Beta Kappa Academic Honor Society and graduated summa cum laude with a degree in Mechanical and Aerospace Engineering at Princeton University.  He also earned a Masters Degree in International Science and Technology Policy from George Washington University.  -Matthew was a warm, compassionate, and generous person, who loved life to the fullest and whose enthusiasm for commercial space exploration inspired everyone who knew him.

Both speakers received a Ecosphere.

A little about the Ecospheres: Like the earth, it is a self-contained world. There are shrimp and algae living in a mutually dependent cycle. The shrimp eat the algae and produce waste and carbon-dioxide that the algae then use to grow and produce oxygen that help the shrimp. As long as it receives the right amount of sunlight at the right temperatures, the process will continue.

The earth is a much bigger, more complicated system. But both systems are very contained. The shrimp will forever be trapped to their container. But the people of earth might be able to expand and branch out from this small world. And if we do, it will be because of efforts like our speakers Tom and Yash.

Thank you for all that you do!

We also had a few door prizes that were given out based upon a random drawing.

Join us for our Monthly NSS North Houston Space Society (http://NorthHoustonSpace.org) meeting. Come join others who are excited about exploring the cosmos, learning how to use the resources of space to improve human life, and who want to go and spread humanity to the rest of the universe.

Mr. DiIorio has a Mechanical Engineering degree in power, propulsion, and energy plus a diploma in Quality and Reliability Engineering. He has presented at professional societies including ASQ and NOMADS, and also at NSS,NASA Lunch and Learns at JCS, NASA JSC ATS (Annual Technology Symposium), and outreach events at GRB convention center and NRG center in Houston. Also, he lectures and supports school provided STEM conferences to encourage students to participate in science fairs and to start STEM college careers.

Meetings open to all age groups and interest levels. Come explore with us the potential that developing and exploring space has to better life here on earth and to open up new frontiers creating new perspectives that can help enrich the human experience.

The Vision of NSS is people living and working in thriving communities beyond the Earth, and the use of the vast resources of space for the dramatic betterment of humanity.

The Mission of NSS is to promote social, economic, technological, and political change in order to expand civilization beyond Earth, to settle space and to use the resulting resources to build a hopeful and prosperous future for humanity. Accordingly, we support steps toward this goal, including human spaceflight, commercial space development, space exploration, space applications, space resource utilization, robotic precursors, defense against asteroids, relevant science, and space settlement oriented education.